The problem is more obvious after the graph has been panned and zoomed. Now, we are going to learn the coordinate systems in G6 to help you solve the issue.

First of all, we know that there are three kinds of coordinate system in G6, we call them: clientX/clientY, canvasX/canvasY, and pointX/pointY.

It is related to the broswer, whose origin is at the left top of the broswer's content and it is not scrolled with the page. As shown below, the two pictures show the cases with different positions of y-scroll, but the origin of clientX/clientY is fixed. But the clientX/clientY coordinates of the left-top of the Container Dom in the two cases are different. Left one has (100, 1000), but right one has (100, 200). 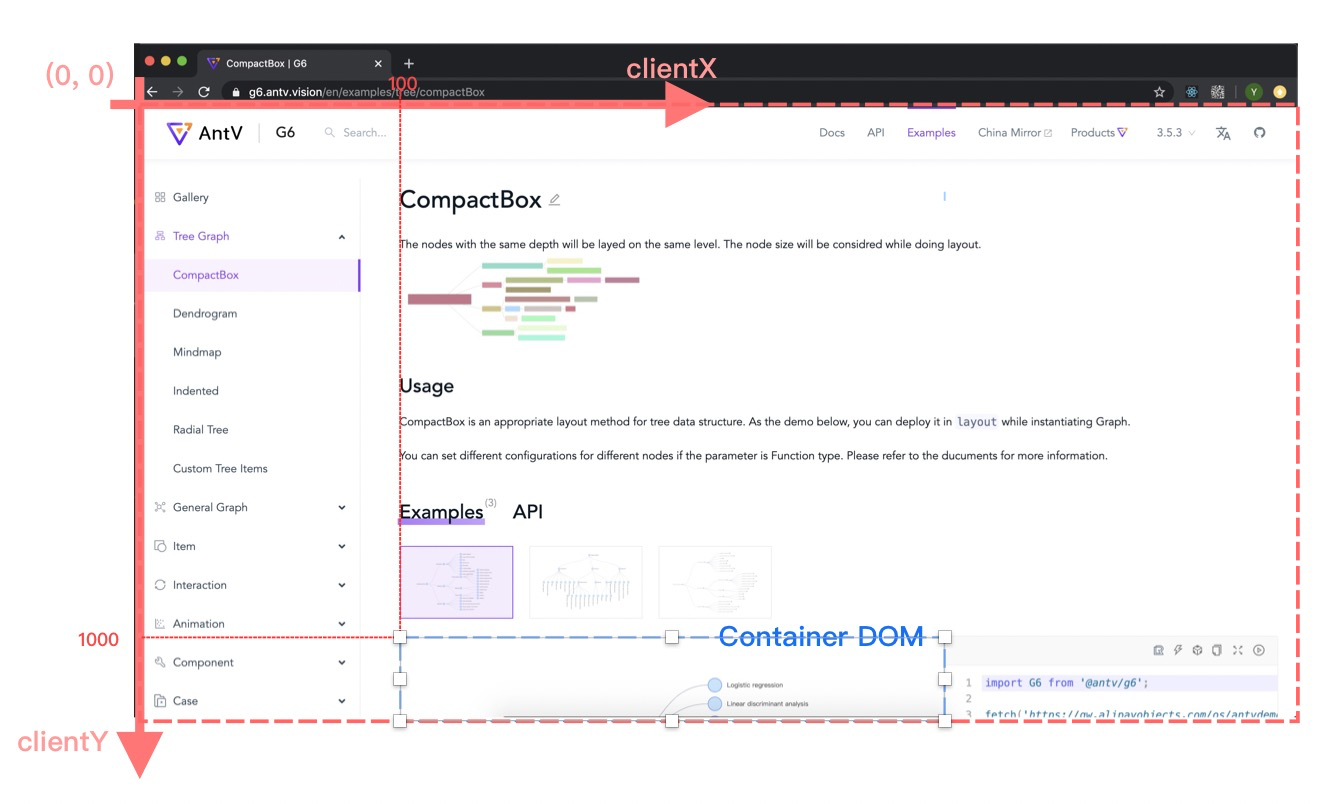 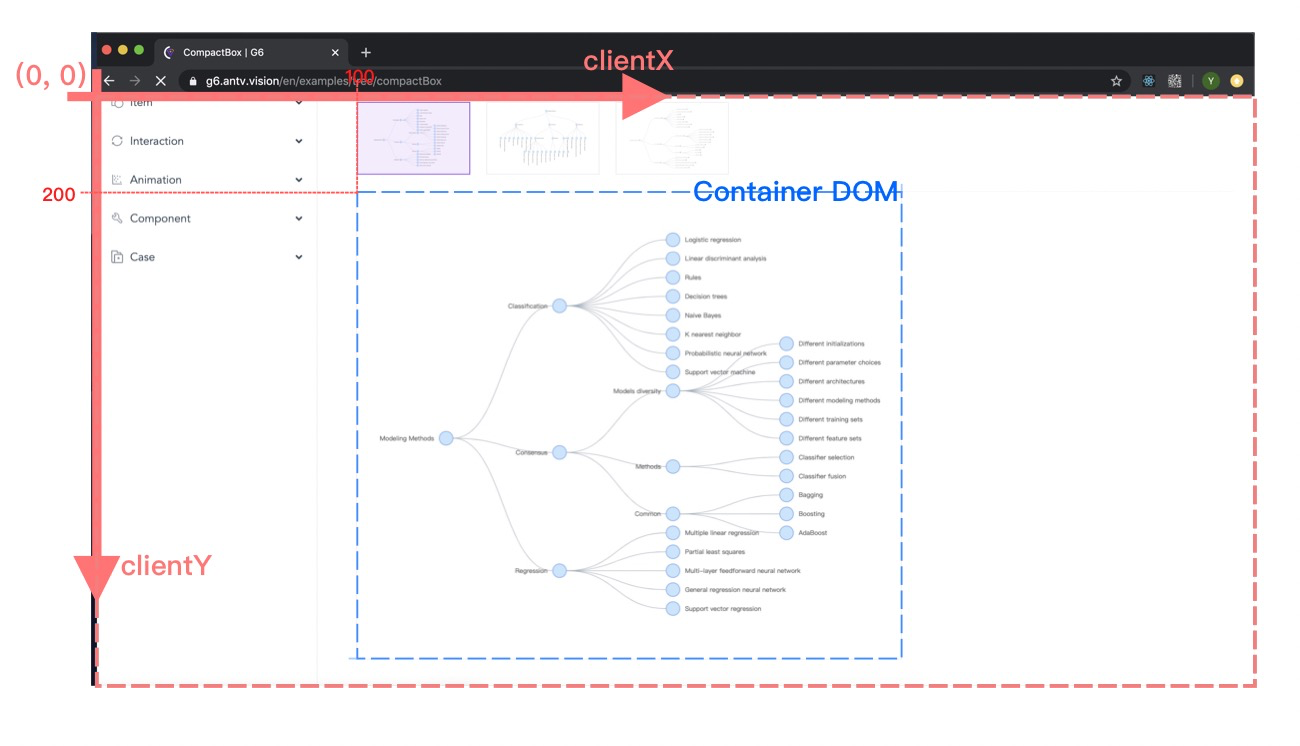 It is the self coordinate system of the Container DOM. We suppose that the width and height of the graph were assigned to be 550 and 500: 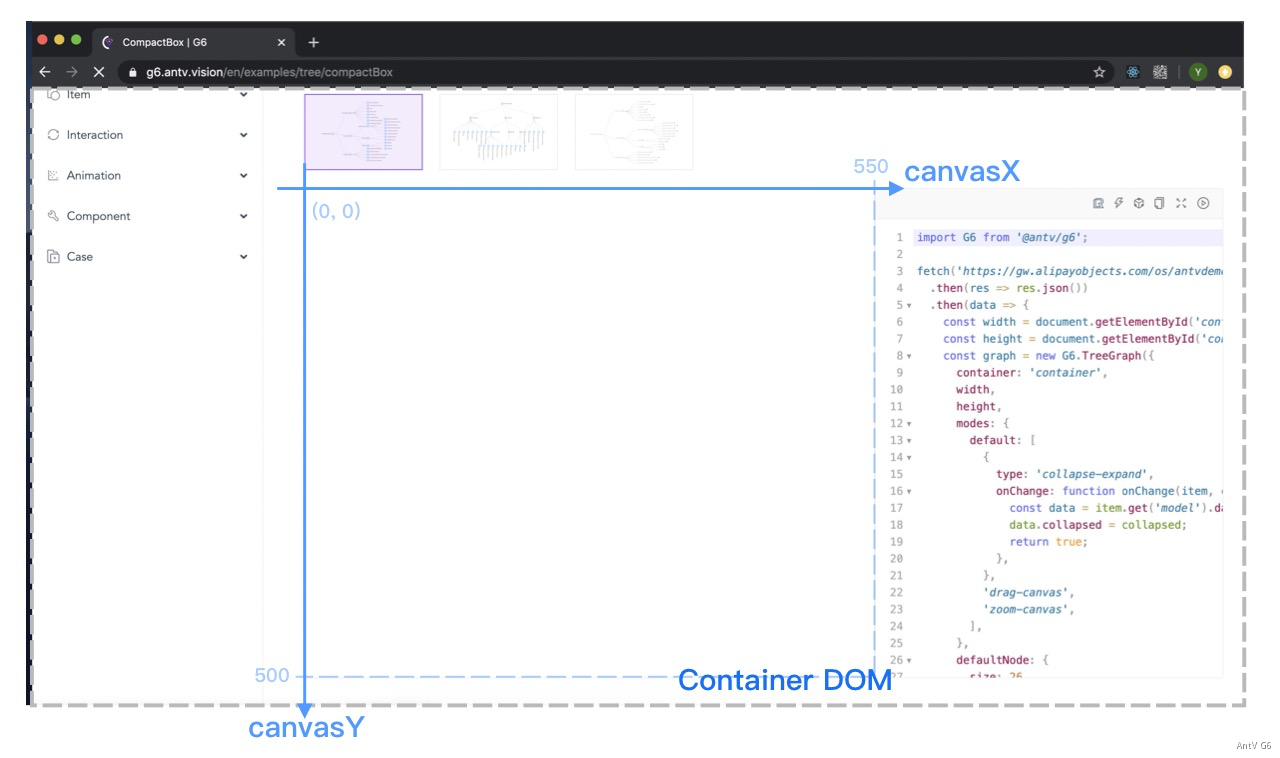 The Relationships between the Three System

To be more specific, we show an example in this section.

The three systems in the figures of this section are colored with grey, blue, and red, corresponds to clientX/clientY, canvasX/canvasY, and pointX/pointY respectively. And the labels and numbers for each system have the corresponding colors.

Figure 1: three coordinate systems when the graph has no transformation.

In fact, zooming the graph is zooming the pointX/pointY system (centered at the its origin by default). Now we zoom the graph with scale 2, which means the transformational matrix of the graph is:

It is easy to be imagine that part of the graph will be out of the Container DOM.

The graph is zoomed with scale 2 means the pointX/pointY system is zoomed with scale 2, the scale of the axes are zoomed two times to origin state. You can think of the coordinate axes as two retractable ropes. The ropes have a mark with '1' or '2' or '3' ... every one centimeter in the relaxed state. These marks are the coordinate values of the pointX/pointY system. To zoom the graph, we pull the ends of the ropes separately and double them in the positive direction, then the distance between adjacent marks becomes two centimeters. 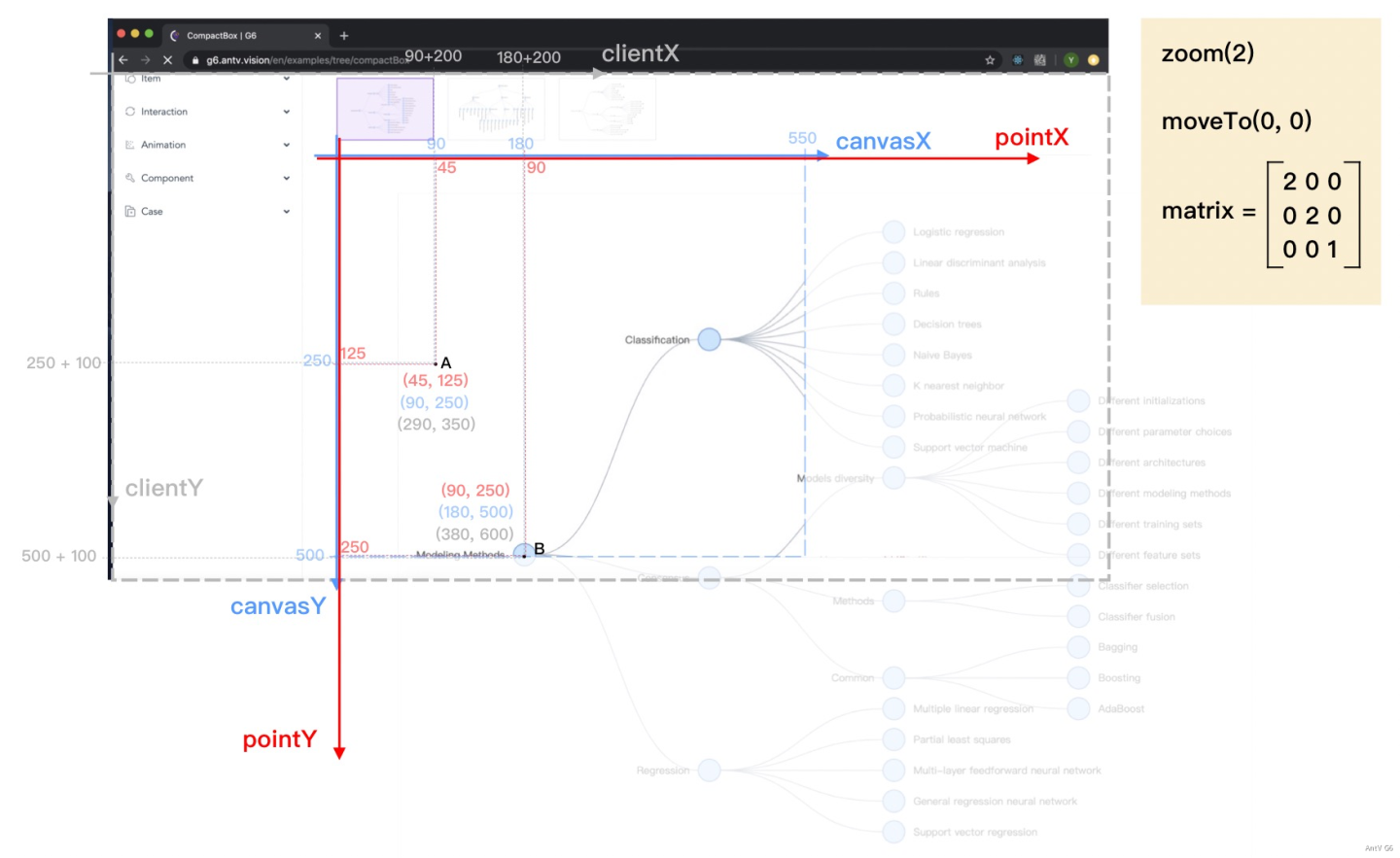 Figure 2: Three coordinate systems when the graph is zoomed.

In figure 2, the canvasX/canvasY and clientX/clientY coordinate value of the black point in figure 1 stays unchanged with (90, 250) and (290, 350) respectively. Due to the changes of the scales of the pointX/pointY system, the value is changed to (45, 125). And the root node (marked with black point B) in figure 2 has same pointX/pointY value as figure 1, and its values in canvasX/canvasY and clientX/clientY are changed to (180, 500) and (380, 600) respectively.

Based on the zoomed graph of previous section, we now translate with vector (50, 50), which means the transfromational matrix becomes:

It is easy to be imagine that the left top part of the COntainer DOM will be empty. 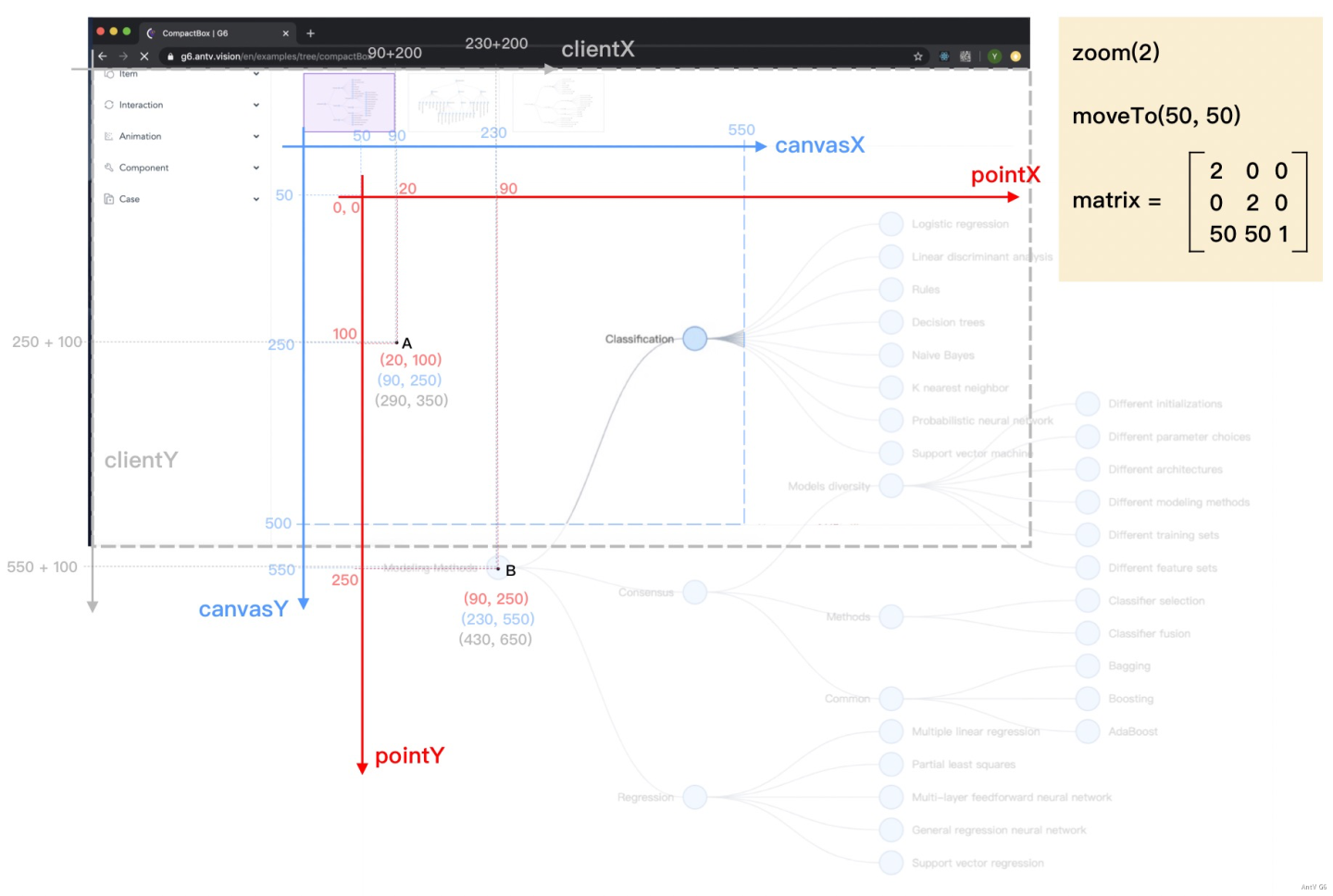 In figure 3, the canvasX/cnavasY and clientX/clientY coordinate value of the black point in figure 1 stays unchanged with (90, 250) and (290, 350) respectively. Due to the changes of the origin of the pointX.pointY system, the value is changed to (20, 100). And the root node (marked with black point B) in figure 3 has same pointX/pointY value as figure 1 and figure 2, and its canvasX/canvasY and clientX/clientY are chagned to (230, 550) and (430, 650) respectively.

Translate the Coordinates with API

Notice that the x and y are the velus of pointX/pointY system.

Easy to find out that these four APIs are all about pointX/pointY, and users are able to translate between clientX/clientY and canvasX/canvasY by combining the four APIs:

At the beginning of this document, we metioned the following case:

Place a DOM with position: absolute , e.g. tooltip, menu, and so on, at the position where

Wrong offset will occur if user takes coordinate values of wrong coordinate systems. The problem will become worse if the graph is zoomed or translated.

Now, we are going to define a DOM for such case:

No matter which case, we recommend two ways to mount the DOM:

We know that a DOM with position: absolute is positioned related to the parent DOM. Mounting the DOM on body means the parent DOM of the DOM is body. So we can use clientX/clientY to assign its left/top: